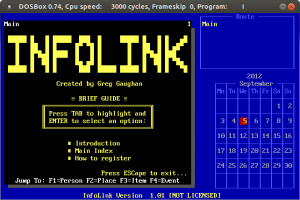 InfoLink was a personal information manager (PIM) - they were all the rage in the early 1990s. It took the hyperlinking ideas that were just being employed by the nascent world-wide-web and let the user build and edit interlinked pages of information. I suppose it would now be called a personal wiki. It distinguished between links for people, places, things and events and had a calendar to show the events. It could call out to external programs to view and edit files or send faxes.

I designed it in 1993 while I was travelling around Europe with work. I wrote it in 1994 using Turbo Pascal, which I'd won in an AI programming competition in a Computer Shopper show in London when I was 18. The indexing in InfoLink was my first implementation of a B-tree.

It still runs (via DOS emulators in Linux for me now), and looks pretty useful I think, even two decades on.

Here's a download of the zipped INFOLINK software. The program executable is 70K.

Here's a shot of the main index page: 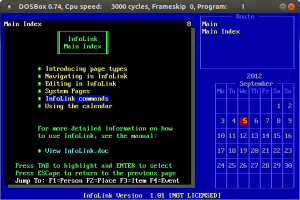 And editing it shows the link tags: 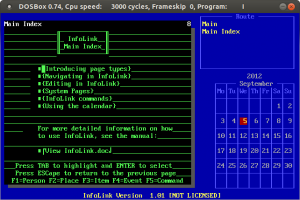 See the breadcrumbs in the Route panel, and the lovely drop-shadow!: 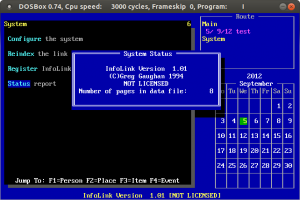 I have the source code somewhere on a floppy disk, and the compiler on several 5¼" floppy disks. I think it would be a challenge to build it again.